Hello my loves!
“Resilience from the Heart – The Power to Thrive in Life’s Extremes” by Gregg Braden is deeply meaningful book.
I started to read this book last week. This book inspired me to share with you guys some quotes…
Because it’s Monday!

“Logic will get you from A to B. Imagination will take you everywhere.”
– Albert Einstein

“Imagination is more important than knowledge. For knowledge is limited to all we now know and understand, while imagination embraces the entire world…”

“We live in a world where everything is connected.
We can not longer think in terms of us and them when it comes to the consequences of the way we live.
Today it’s all about WE.”
– Gregg Braden

“Insanity: doing the same thing over and over again and expecting different results.”
– Albert Einstein

We heard this quote so many times and we see that the most part of people don’t like a change or just reject the idea of trying something new. The word “change” means that we need to leave our comfort zone (and it’s so comfortable in our comfort zone)… We need also take action (now or later)…
How we can do the same things over and over again and expecting different results? The most fascinating example is our system of education. I mean, the traditional path of education in school… [yeah…]
“Insanity: doing the same thing over and over again and expecting different results.” [yeah…]

What we can understand as a change?
As an example, “change” can mean to try new coffee, to avoid gluten in food (this is actually something I’ve started to work on :-)), to start learning a new language etc.

We don’t like to get stuck and the only way to avoid it is to change something.
The most challenging part of “change” are people in our communities who say “NO” to any other ways of thinking. As an example was the communism in the country where I was born (Poland). I wasn’t born in a free country. I wasn’t lucky enough. Don’t get me wrong… I’m no longer feeling sorry for myself.
In communism was forbidden to think different. People weren’t able to leave the country, to travel … because of closed boundaries… and they missed a lot of opportunities in life.
It was taught through the word “ubogi” that…poor people are close to the God (in psychology: “poor mentality”). Psychology topics were skipped and a lot of people still think that psychology is bullshit.
Now it’s a long time after the communism was collapsed but still the old ways/destructive patterns of thinking are in minds of people. People still think that they don’t deserve a lot of things…e.g. go to the restaurant or to travel the world (in psychology:”victim mentality”) and people who have money are consider to be bad (in psychology:”poor mentality”).
Such a thing like to travel seems to be still impossible. People still believe, that they “CAN’T” (a lot of things) …
This is why I’m convinced that our limitations are in our minds/ in our mentality/ in our lifestyles.
What do you think about this topic?

All photos were taken in France.

Fashion – about dreaming and making other people dream 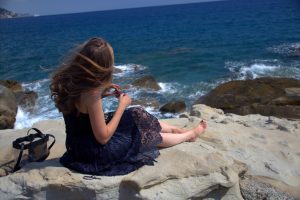 Be the CHANGE you want to see

I’ve been dreaming traveling the world since I was a[...]

Thank you for being a part of my journey! Have[...]